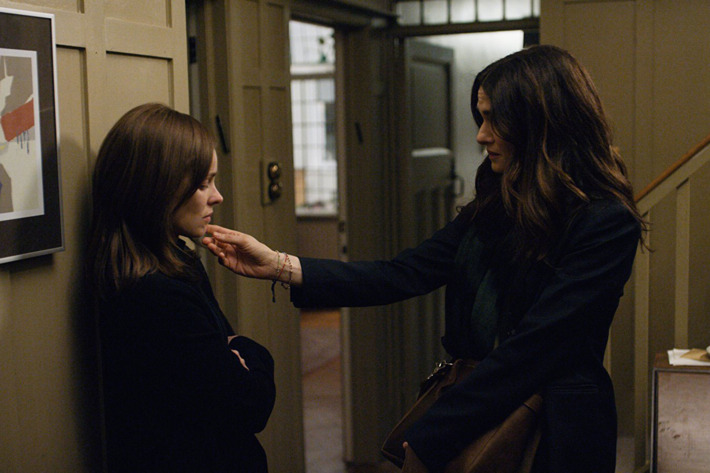 Ronit (Rachel Weisz) returns to her home in London after many years living in New York following the death of her father, a rabbi in an Orthodox Jewish community. There she meets her two childhood friends, Dovid (Alessandro Nivola) and Esti (Rachel McAdams), who are now married to each other and set to carry on the rabbi’s work. There are many other relatives, who express their resentment at Ronit’s departure with different degrees of hostility.

That is all we’re given to work with as we enter into Disobedience, but like with all good family dramas, the premise lives on the surface, and years of shared experiences, yearning and disappointment form a powerful undercurrent that threatens to spill over at any minute.

It is intimated, and soon revealed, that Ronit and Esti had a relationship when they were teenagers, the discovery of which precipitated the former’s falling out with her dad. Esti, however, stayed behind, honored tradition and married a man. Them being in the same room is alone a transgression: Esti has a role to play that’s been defined for her, and as for Ronit, it’s made very clear very early on that her return to honor her own father is tolerated only in exchange for perfect decorum.

Disobedience lives in the space between these two women. They treat each other with that dusty familiarity of people who were close once but haven’t spoken in years. Even while they try their best to discuss only banal things, we see that there was a burning love once, but it’s been eroded by time. Their history hangs heavy in the air, as do a thousand reproaches.

Both Rachels give amazing performances. McAdams, I think, has the more difficult job, as the woman who stayed inside her chosen walls and has to navigate her imposed obligations; it’s amazing that she can pull off such a dramatic role right after also knocking a comedic one out of the park with Game Night. Weisz, as the self-branded outsider, is more aloof but reminds us that she still has a claim over her own upbringing.

The film succeeds by letting these characters reconnect slowly, naturally, awkwardly, by giving them space to circle each other; it explores religious intolerance and homophobia but does not strip them of their agency. It looks at them with sympathy, not with judgement. Like life, it has no neat resolutions to offer, but it reaches for something true. It offers hope, but not a fantasy.

Begin typing your search above and press return to search. Press Esc to cancel.